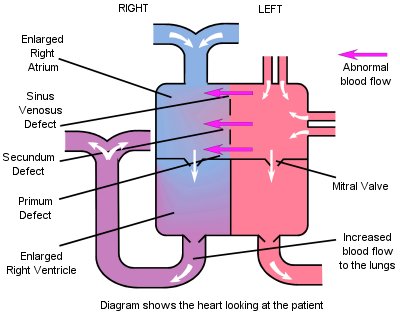 In this defect there is a hole between the top chambers (receiving chambers or atria).  Due to the higher pressure in the left side of the heart, this allows oxygenated blood to flow through the hole from the left to the right side of the heart, and back to the lungs, in addition to the normal flow.

There are three types of Atrial Septal Defect, the most common is where the hole is in the middle of the atrial septum (central heart wall) called the secundum defect.  Holes in the lower part of the septum, called the primum defect (partial atrioventricular septal defect), are often associated with an abnormality of the mitral valve (resulting in a leak).  Less common are holes in the top of the septum which are associated with abnormality of the right upper lung vein, called the sinus venosus defect.

The amount of blood flow from the left to right atria is dependent on the size of the hole and on the pressure difference between the atria.  The higher the rate of flow, the more strain that is placed on the heart.

Generally patients with an ASD defect will exhibit no symptoms (they are asymptomatic) and the problem is only found when a routine clinical examination detects a heart murmur.  Occasionally a patient will exhibit poor weight gain and a failure to thrive, and if there is mitral valve leakage there may be early symptoms of breathlessness.

Small holes which allow little blood flow from left to right generally cause no problems, and if they are located in the middle portion of the septum (central heart wall), the secundum defect, they may even close on their own (spontaneous closure).

However, moderate and large holes do not close, and the extra work over the years places a strain on the right side of the heart causing an enlargement of both the receiving and pumping chambers (atria and ventricles).  It is therefore, usual for treatment to be recommended in the first few years of life for larger holes, before excessive strain has been placed on the heart.

Holes at the bottom (primum defects also sometimes called partial atrioventricular septal defects) and large holes in the middle (secundum defects) may require surgical patching and any abnormality of the mitral valve will usually be repaired at the same time as the atrial septal defect is closed.  However, most holes with good margins (sufficient surrounding tissue) may be closed using an atrial septal defect occlusion device which is placed in position by way of a catheter from the femoral vein, thus avoiding the need for open heart surgery (see Cardiac Catheterisation Topic Note).

If there was repair of the valve, it may have a residual leak which will require monitoring in case further surgery or valve replacement is needed.  However, many patients cope very well with leaky valves and do not need further surgery.

"Our daughter has recently had an operation for Primum ASD.  She was only in hospital for one week; everybody said how well she got over the operation.  Although she didn't seem well enough to come home, as soon as she did she got stronger and happier every day, and she is now like a new little girl.  Before her operation she was always tired and clammy, but now she's up at 6am and goes to bed at 7pm".