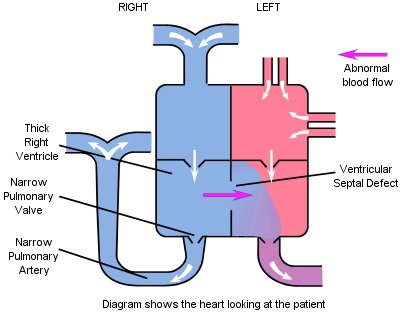 In this defect, there are four problems, (hence tetra) which were described by a Frenchman named Fallot - hence Fallot's Tetralogy.  The two main problems are a narrowing between the right ventricle (pumping chamber) and the pulmonary (lung) artery, and a hole between the two ventricles, a VSD.  There is also a thickening of the right ventricle and the main blood vessel to the body, the aorta, overrides the VSD.

The narrowing of the pulmonary (lung) artery makes it harder to get blood to the lungs, so the right ventricle has a much harder task than normal.  Usually the pressure on the left is about four times greater than the right, but due to the increase resulting from the difficulty in pumping blood to the lungs, the right ventricle pressure becomes such that it is able to pump blood through the ventricular septal defect (VSD) and into the left ventricle as well as trying to fill the lungs.

Because of the high pressure in the right ventricle, the muscle becomes overdeveloped and thickens.  All of these problems result in unoxygenated blood which has already been around the body, being diverted from the lungs where it should be going to collect oxygen, to the aorta and back around the body again.  Thus the blood circulation to the body carries lower levels of oxygen.

Initially, there may be very little to suggest a problem other than a heart murmur, but gradually blueness (cyanosis) will appear.  This may first be noticed when the child cries or tires itself.  Other children will experience 'blue spells' when they may cry as though in discomfort, breathe quickly and become floppy and paler than usual, and they may even go off to sleep (almost like a slow faint).  If this happens it is important to reassure them by cuddling them, and their circulation can be improved by getting them into a squatting position with their knees on their chest.

Drugs may be given to help reduce these 'spells', but an operation will be needed eventually in all cases.  For some children, it will be possible to have one operation during which the VSD is repaired and the narrowing in the pulmonary artery removed.  Others, particularly younger children or those where the pulmonary (lung) arteries are very small due to the lack of blood flow, will require palliative (helping) surgery before the complete repair.

Palliative surgery may take the form of a shunt, in which the surgeon inserts a plastic tube in between the artery that goes to the arm and an artery to the lungs. This increases the blood flow to the lungs which makes the child less cyanosed (blue).  The arm circulation continues normally.  In some children, it may be possible to insert a 'balloon' into the narrowed pulmonary artery (by way of a catheter) and by inflating the balloon, stretch the narrowed portion.  Both procedures are temporary measures, and corrective surgery will be necessary at a later date.

All children will require antibiotic cover during any dental treatment to prevent any bacteria entering the bloodstream from where they can reach the heart causing bacterial endocarditis (infection of the heart lining), which can be very serious.

"We were devastated by the seriousness of his heart condition when it was fully explained, and it was a shock to think that it had been six months before we realised how dangerous those blue spells were.  He did well to be back on the ward after just a week in Intensive Care, and three months after surgery he was taken off all medications, and all is well".