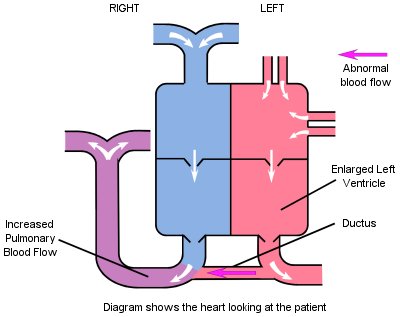 This defect is not a fault in the internal structure of the heart as in most 'holes in the heart'; it is the continuance of a direct connection between the aorta and the lung (pulmonary) artery, which normally closes shortly after birth.

Whilst a baby is in the womb, oxygen is supplied by the placenta via the umbilical cord and the baby's lungs are not expanded and require only a small amount of blood for them to grow.  The ductus is one of a number of nature's "short circuits" which allows blood to bypass the baby's lungs whilst in the womb, at which time the lungs resist blood flow.  When the blood is pumped from the right ventricle, instead of entering the lungs via the pulmonary artery, as after birth, most of it is diverted along the ductus to the aorta from where it goes to the placenta and is re-oxygenated.

Generally the ductus (and the other "short circuits") close within a few days of birth, and the connections between the two sides of the heart no longer exist.  The resistance to blood flow quickly falls with the onset of breathing.  In some babies the ductus fails to close and because of the higher pressure in the left side of the heart (needed to pump blood around the body), this allows blood to flow from the aorta to the lower pressure pulmonary artery (the reverse of the flow in the womb), and increases the amount of blood flowing into the lungs.

If the ductus remains open for more than three months, it is unlikely to close on its own and closure is recommended.  In the case of a large ductus this is advised to stop the extra blood flow into the lungs, which increases the workload on the heart and lungs.  Even for a small ductus which may not be causing any great increase in the workload, closure is recommended as the narrow tube of the ductus is a possible site for the development of infection from any bacteria that might enter the heart via the blood stream.

Closure of the ductus can either be performed by making an incision in the left side of the chest and tying off the tube (this operation does not use the heart lung machine), or in most cases it is closed by catheterisation (see Cardiac Catheterisation Topic Note). A coil or device is introduced via a catheter from the femoral vein or artery in the groin and released thus closing the ductus.

The method of closure chosen will depend on the size of the ductus and preference of the cardiologist in each case.

Once the closure has been made, the circulation returns to normal and there is usually no need for antibiotic cover during dental treatment after 1 year.  The patient may be discharged from the cardiac clinic completely, or they may be called for routine check-ups on an infrequent basis.

"We were extremely nervous - we needed support and had so many questions.  That is when we were given information about the Down's Heart Group.  You came to see us and gently answered our questions and calmed our fears.  We were talked through all the details by parents who had also faced the terrible worry - so important to talk to people who've lived it too!  It all went well and nine months on, he needs no special care or treatments and he has been discharged from the cardiac unit."