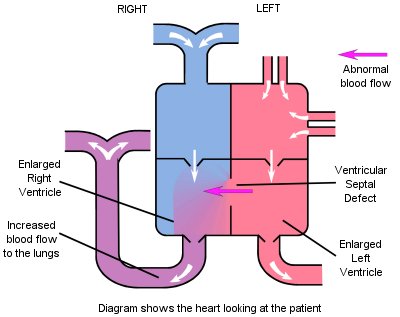 In this defect there is a hole between the bottom chambers (pumping chambers or ventricles).  Due to the higher pressure in the left side of the heart, this allows oxygenated blood to flow through the hole from the left to the right side of the heart, and back to the lungs, in addition to the normal flow.

The amount of blood flow from the left to right ventricle is dependent on the size of the hole and on the pressure difference between the ventricles.  The higher the rate of flow, the more strain that is placed on the heart.  The abnormal blood flow is responsible for the murmur that may be heard using a stethoscope.

Generally patients with a small VSD will exhibit no symptoms (they are asymptomatic) and the problem may only be found when a murmur is detected upon routine examination.  Patients with a moderate VSD may breathe quickly, exhibit poor weight gain, be slow at feeding and prone to chest infections.  This will be more pronounced where the hole is large.

Patients with moderate or large holes will require treatment with diuretics such as Frusemide and Spironolactone to control fluid retention and to reduce the volume of blood in the circulation, thus making the workload on the heart easier.  Drugs such as Captopril may be used in conjunction with these, to decrease the amount of left to right shunt.

Slow weight gain may lead to supplementation of a baby's milk with additives such as Calogen or Duocal, which increase the calorific intake.  Severe feeding problems may necessitate feeding by way of a naso-gastric tube (through the nose and directly into the stomach), so that the baby does not use extra energy in obtaining nourishment.

Many VSD's will close spontaneously (naturally) or get much smaller, so it is normal practice to leave a patient with a small or moderate VSD and monitor their progress before deciding to operate.   Indications for operation may be continued failure to thrive despite medication, or concern about high pressure in the pulmonary artery - pulmonary hypertension (See Pulmonary Hypertension Topic Note).

In some children with large VSD's, it is apparent that spontaneous closure is very unlikely due to the size and placement of the hole, and surgery will be recommended without delaying to see if the hole diminishes usually at 3-6 months of age.  If closure is unlikely, nothing is to be gained by waiting, and the aim is to limit damage to the lungs.

All patients who have had an operation should be followed up life-long by a cardiologist to make sure that no-other complications occur as they get older.

"From the echocardiogram it was clear that he had a VSD, but they were 90% sure that surgery wouldn't be necessary.  Monthly appointments were made to monitor the situation, and as far as I was aware all seemed OK, although his breathing was a little fast.  You can imagine my shock when at one of these appointments I was suddenly told that they recommended surgery within six weeks.....  He is now almost eighteen months and doing very well, and you can really see the benefit of surgery.  Before the operation he was very pale and puffed away like a steam train, now his breathing is normal, he is a healthy pink colour and is a lovely chubby little boy".