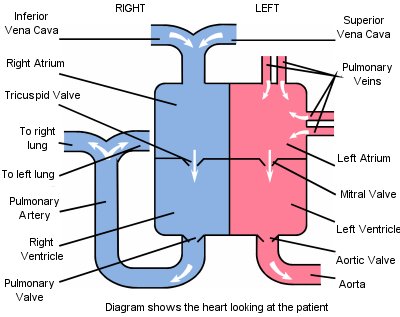 The heart is a pump consisting of four chambers.  Its job is to pump blood which has already been around the body, to the lungs to obtain oxygen, and then back around the body to supply the organs.

The main arteries of the lungs branch into very many smaller vessels (much like the structure of a tree: trunk, branches, twigs), with much thinner walls which are able to take oxygen from the air in the airways of the lungs into the bloodstream.  The oxygenated blood then returns from the lungs in the four pulmonary veins and enters the left atrium.

From the left atrium, it is passed via the mitral valve to the left ventricle.  Again, when the heart muscle contracts, the mitral valve closes, and the pressure in the ventricle rises forcing open the aortic valve which allows blood to flow into the aorta, and from there into the many vessels which supply the body with blood.

Thus it can be seen that the right side of the heart pumps blood to the lungs, which is a relatively easy task, whilst the left side has the more difficult task of pumping blood all around the body.  As a result, the pressures in the left ventricle are generally about four times greater than that in the right ventricle, and the wall of the left ventricle is thicker than that of the right.

A congenital heart defect is an abnormality in the structure of the heart which is present from birth.  There are many different types, ranging from fairly ‘simple' defects to complex problems involving all four chambers of the heart.  Two patients with the same defect will not necessarily show the same symptoms, as the exact size and placing of the hole(s), the width of arteries etc. will vary, and will result in a different presentation in each patient.  Due to the high incidence of cardiac problems in patients with Down's Syndrome, it is therefore recommended that all babies have an echocardiogram early in life, and any suspected abnormality is examined by a cardiologist who can make a complete diagnosis.

"Finding out our new baby had Down's Syndrome came as a great shock because no one had ever mentioned the possibility and we thought it only happened to women in their forties.  Discovering that he had a serious heart defect was much worse!  There was nothing we could do about the Down's Syndrome; it was nobody's fault, least of all his!  It just happened and we had to accept it, but being told he had a life threatening heart condition was awful, we were lost and bewildered by all the medical information.  All we wanted was for our little boy to live, it didn't matter that he had Down's Syndrome, he was our son and we loved him".