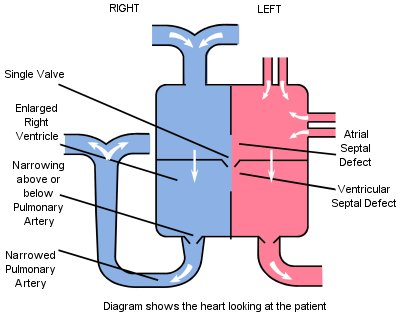 A small percentage of babies have a complex heart condition which combines the most common defect associated with Down's Syndrome, the Atrioventricular Septal Defect (AVSD) with another defect called Fallot's Tetralogy.

Generally it is possible to combine the information from different defects to give an overall picture but in this combination it is more difficult as the Atrioventricular Septal Defect (AVSD) causes a left to right flow of blood within the heart whilst Fallot's Tetralogy produces a right to left flow.  This is the reason we have produced a Topic Note specifically for these combined defects.

So in combination these defects result in:

When the heart pumps in someone with AVSD (Atrioventricular Septal Defect) and Fallots the effect depends on the relative severity of the two conditions. Usually the narrowed pulmonary artery makes it hard to pump blood to the lungs resulting in increased pressure in the right ventricle which causes the muscle to become overdeveloped and thicken.  The blood then passes through the AVSD to the left side of the heart and out to the aortic valve and to the body.

The combination of these two defects early in life can almost balance each other out such that the child may be rather blue, but not too breathless. There can, of course, be too much blueness or too much breathlessness, depending on the severity of the different conditions.

This depends on the severity of the AVSD or the Fallots. Usually, the children are quite blue and require a BT shunt (see Blaylock, Glenn & Fontan Proceedures Topic Note) to increase the amount of blue going to the lungs. Then the definitive operation is carried out later, perhaps at 1-2 years of age, so that the holes can be closed, the valves repaired and the way out to the lung artery widened.

As for any cardiac disease, it is important to keep an eye on the growth of the baby, so that it puts on weight normally. Usually the normal immunisations can be given, and it is important to remember that the teeth must be looked after. If there are any operations or any dental extractions, then antibiotics should be given beforehand.